In Florida, it’s not unusual for alligators to pop out of the water — they’ve even been known to attack humans. 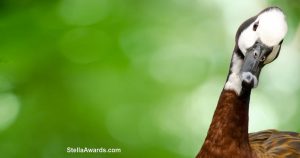 But that’s not what bothered Darlene Griffin. The 30-year-old woman was in Okeeheelee Park in West Palm Beach, Fla., when she was “attacked” by a different kind of water creature: a goose. Griffin says she jumped between her young son and the bird to protect the boy, then fell down and broke her tailbone when the fowl tried to bite her.

She has sued Palm Beach County for allowing the wild animal to roam free in a public park. She is asking for at least $15,000 to cover her medical bills, as well as her “mental and physical anguish.”

Griffin’s attorney Joe Fields says that county officials later removed several geese from the park, including the one which attacked his client — which shows the geese are dangerous, he says. So according to him, the county was wrong to let a wild animal exist in the park, yet removing it proves it’s at fault. In America’s civil courts you’re damned if you don’t, and really damned if you do.

I saw one reference that said “the case did not succeed” but wasn’t able to find a second source to confirm that.

Wild animals exist in nature, so one takes a risk when they choose to visit nature. This isn’t the last wild animal case we’ll see in TSA….

Mitchell, an attorney in Virginia: “One possible factor in why we lawyers tend to be held in such disrepute: When a doctor or an accountant or a plumber does something stupid, chances are no one finds out, maybe not even the client. But a lawyer’s lapses in judgment are spread on the public record forever, for everyone to see. Everyone has access to our mistakes.”

Sorry, Mitch, but I don’t buy that. When doctors make mistakes, their patients often die — and most people notice things like that! When a plumber screws up the house may be flooded, perhaps with sewage. When an accountant makes an error, the IRS often comes sniffing around. And in all of those cases, you know what? There will be lawyers ready to sue and make those mistakes public record forever!

Travis in Washington: “I don’t know about the justness in suing the gun manufacturer, but the gun shop was in violation of several federal laws for sloppy selling of guns, not keeping records, etc. For example, the [local newspaper] articles suggest that the gun store has no record of selling the gun used in the sniper attacks. The gun just kind of ‘walked off.’ This suit doesn’t seem frivolous — and thus, doesn’t seem to fall within the ‘Stella’ realm.”

Reports do indicate that the store was sloppy — and indeed under investigation. I did address that the gun wasn’t sold — the report said it was “apparently stolen” from the store. But the litigants aren’t satisfied to wait to see what the results of the ongoing federal investigation are and are suing the store. That doesn’t, in my opinion, necessarily make them worthy of a Stella Award. What does make them worthy is including the manufacturer while, at the same time, claiming that the suit is absolutely not an attack on the rights of lawful gun owners. Either the manufacturer did something wrong or not; simply manufacturing a gun which is then used illegally by criminals should be no more of a crime (or grounds for lawsuit) than manufacturing a car which is later used illegally by criminals to run someone down.

Last, the very first TSA case was about Kurt Kooyer, a doctor who worked with poor people in rural Mississippi, a state known for generous civil juries. Dr. Kooyer was sued by a patient who admitted she was not harmed by his actions — she just jumped in on a class action lawsuit against a drug manufacturer because she hoped to get “a few thousand dollars.” Fed up with unfounded lawsuits against him, Dr. Kooyer and his obstetrician wife left Mississippi, and only two doctors are left to serve a two-county area. Dr. Kooyer did his patient no harm, but his patient, by suing, harmed every one of her neighbors, who now have less access to medical care. I’m proud to say Dr. Kooyer is now a TSA reader.

He writes, “I appreciated your description of my case. I would like to say your piece was the best publicity I received from a ridiculous lawsuit, but I’m afraid being called to a roundtable with the president himself took tops. I appreciate your work.”

Dr. Kooyer sat next to Mrs. Bush during the president’s State of the Union Address Wednesday night (which I unfortunately missed since I was at a funeral). I don’t know if TSA helped get Dr. Kooyer’s story in front of the president, but it’s good to know that our lawmakers are starting to look at the kinds of cases I report on with as much disgust as I do.