The tragic fire last month at the Station Nightclub in West Warwick, R.I., killed 100 people and injured many more. Early indications are that the Station’s owners used cheap foam to provide soundproofing around the stage — very flammable foam which quickly spread the fire, when more expensive non-combustible foam should have been used. And featured band Great White, which set off fireworks inside the packed club during its performance, also appears to be very much at fault. 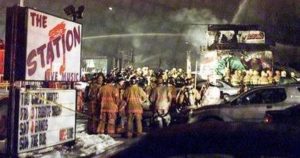 Naturally, even before the smoke cleared the smell of lawsuits filled the air. With so many dead, legal observers expect settlements and judgements will reach $1 billion. Surely the burned-out night club and band won’t have that much in assets or insurance coverage. Who, then, would have that kind of money? If the lawyers can figure out who had money and had any involvement whatever with the event, they would then know who to sue. Anyone. Anyone at all.

Radio station WHJY-FM in Providence ran advertisements for the concert, and Michael Gonsalves, a WHJY disk jockey, was there to introduce the band. (Gonsalves, by the way, is one of the dead.) WHJY is owned by Clear Channel Communications, which owns more than 1,200 radio and TV stations, as well as other media properties.

A gigantic media corporation, you say? And one of its outlets helped lure poor, innocent victims …er, customers!… to the show? Good enough, say two Providence lawyers: they have announced they will name Clear Channel in the suits they are filing to get their share of that billion-dollar damage estimate.

Attorney Steven Minicucci, the president of the Rhode Island Trial Lawyers Association, represents two people injured in the fire as well as the family of one man who died. He says Clear Channel “bears considerable responsibility” for the fatalities and injuries because the commercials it ran for the show did so well that the night club was overcrowded. “Their hands are all over this event,” he says.

Attorney Max Wistow, who represents a number of victims, claims that ethical considerations demand that he name Clear Channel. “Any lawyer who didn’t exhaustively explore their relationship to this thing and the facts surrounding their participation would be absolutely remiss and guilty of legal malpractice,” he argues, as if that doesn’t show, in and of itself, that there’s something very, very wrong with America’s civil court system.

What was WHJY’s official involvement in the concert? Station general manager Bud Paras says the station was not a sponsor, but merely produced and ran 15 30-second commercials for the event, for which it was paid $700. The station was also given, and gave away, just four tickets to the concert.

Rhode Island attorney Edward C. Roy, who doesn’t represent any victims, finds the whole idea of involving Clear Channel a bit far fetched. “I don’t think it’s necessarily a clear case of liability,” he says, “but given the huge economic loss suffered by the victims, you’ll definitely see them named. Of the people that are involved, they’re probably the most well-insured. They’ve got the deepest pockets.” Those, to be sure, are sweet words to a litigator. Well, the last two sentences, anyway.

Roy says that in normal civil cases, the blame is divided up among the various defendants according to how much they are at fault. So, for instance, if a defendant is judged to be 1 percent at fault, they would be liable for 1 percent of any jury award. But in large cases, Roy points out, the system in the state is designed “to help make injured parties whole,” so judgements can be collected from any at-fault defendant — known as “joint and several liability.” Thus, even if Clear Channel was judged to be only 1 percent at fault, they could be forced to pay as much as 100 percent of any awards which, again, is estimated to be in the vicinity of $1 billion for all the cases.

With that logic, anyone who promoted the concert is as much as 100 percent liable — such as people who heard about the concert and told a friend. Is that reasonable? Is that fair? Is that what the USA stands for? Why should any person or company be made to pay any portion of the blame assigned to someone else? Joint and several liability is all about “helping make injured parties whole,” but it doesn’t explain how the parties that the doctrine damages or destroys; their “wholeness” isn’t an issue, and thus the damage done to the people who were in the wrong place at the wrong time is merrily transferred to those who weren’t.

Over time the list of defendants in the case expanded to more than 45 as other deep pockets were identified. In addition to the nightclub owners, list includes the state fire marshal, for failing to personally be there to ensure there were not too many people inside; CBS television, because a local station’s cameraman was inside and maybe, just perhaps, he got in the way of people trying to run after the fire started; the city fire inspector, for failing to note that flammable foam was used on the stage for soundproofing; the company that made the foam, even though it was not sold as fireproof material; the nightclub’s insurance company, because it didn’t discover that the soundproofing foam wasn’t fireproof; Anheuser-Busch, who makes Budweiser beer, which was served at the nightclub; and, naturally, the band, Great White, for starting the fire — probably one of the few defendants that makes sense in the case. But they don’t have hundreds of millions of dollars in assets or insurance to pay the claims, so that’s why everyone else is named. Because without deep pockets, the plaintiffs can’t cash in.

Band Manager Daniel Michael Biechele, 26, faced criminal trial: he was the one who set off the pyrotechnical effects that started the fire.

Biechele, against his lawyers’ advice, pleaded guilty to 100 counts of involuntary manslaughter on February 7, 2006, in what he said was an effort to “bring peace — I want this to be over with.” State Prosecutor Randall White asked the court to sentence Biechele to 10 years in prison, the maximum allowed under the plea bargain, but Superior Court Judge Francis J. Darigan Jr. sentenced Biechele to 15 years, with 11 suspended, plus 3 years of probation. The judge, at least, was totally correct when he told Biechele, “The greatest sentence that can be imposed on you has been imposed on you by yourself.”

While in prison, Biechele sent handwritten letters of apology to all 100 victims’ families. Many wrote letters to the parole board asking for his release. “In the period following this tragedy, it was Mr. Biechele, alone, who stood up and admitted responsibility for his part in this horrible event,” wrote radio host Dave Kane and his wife Joanne O’Neill, the parents of the youngest victim, Nicholas O’Neill. “He apologized to the families of the victims and made no attempt to mitigate his guilt.” Biechele was released from prison on 19 March 2008.

The nightclub owners were also criminally charged. Brothers Michael and Jeffrey Derderian changed their pleas from not guilty to “no contest.” Michael received the same sentence as Biechele; Jeffrey received a 10-year suspended sentence, three years’ probation, and 500 hours of community service. Judge Darigan said the difference in the brothers’ sentences reflected their respective involvement with the purchase and installation of the flammable foam.

Who Paid Out for the Lawsuits?

Settlements definitely didn’t reach $1 billion. But by September 2008, $115+ million was paid to, or offered to, the victims or their families:

The fire was the fourth-deadliest at a nightclub in U.S. history, and the second-deadliest in New England, surpassed only by the 1942 Cocoanut Grove fire (492 deaths). Sure enough, a lot of non-involved parties had to cough up a lot of money, including taxpayers. My unanswered question: how much did the lawyers pocket? Sadly, it was likely around a third of the $115+ million.

In 2014 Clear Channel renamed itself to iHeartMedia, and warned it may have to file bankruptcy. Their $22 million settlement hardly figured in to that: the company did file in March 2018, restructured $10 billion of their $20 billion in debt, and emerged from bankruptcy in May 2019.

One job related to this case I really would not want: deciding on which victims got what percentage of that money: there were a lot of victims from that horrible night, but who should get more: the family of a teen who was killed, or someone with terrible and painful burns? Tough decisions were made.

Letters flowed in on the dog killer (Case 040), but I’ll let one speak for all.

Brian in North Carolina: “The state of affairs of this country wherein a *convicted criminal* can even get away with *filing* a lawsuit against his own victim, never mind the ensuing (er… no pun intended) litigation, is appalling. If I were president…. No, scratch that — the president doesn’t have enough power. If I were tyrant of America, I’d end all this cushy treatment of criminals. Criminals earning money? Preposterous! Criminals being treated to fine food and pleasant living arrangements? Insanity! If I were running the penal system, criminals would sleep on uncomfortable beds, eat the nastiest-tasting (while not harmful, of course) slop in the world, be ‘mandatory volunteers’ for all inmate jobs, and forget about amenities like air conditioning! The pioneers of this country survived without it; so can criminals.”

I don’t think too many prisoners are getting “pleasant living arrangements,” but I get your point. I’m all in favor of prisoners doing useful work and earning money — as long as it all goes to paying for their incarceration and/or paying compensation to their victims. But suing their victims? That’s beyond outrageous.