I got a fair number of responses to a letter writer from Case 94 who noted, “I’m starting to understand Shakespeare’s ‘Kill all the lawyers.’”

Several were from lawyers objecting that the line is actually a “tribute” to lawyers. Yet another lawyer (as lawyers are wont to do) took the other side. Sort of!

Robert in Michigan: “I am a lawyer and as a member of that profession was dismayed to read David in Maine’s comments. My first reaction to this widely overused, misused and often abused quote was to contact you to set the record straight regarding the actual meaning and context of the quote.

I always believed and understood that the quote was attributed to a character in Shakespeare’s play, King Henry VI, who was involved in the overthrow of civil government and the establishment of a dictatorship. I was under the belief that this statement reflected Shakespeare’s recognition and appreciation of the important role lawyers play in maintaining the rule of law and an orderly civil society and that therefore, the phrase paid tribute to lawyers. That is, until I read [this illuminating blog post].

As you will see, lawyers were seen as protecting the privileged and corrupt establishment, as part of the resistance to needed social change and justice. Fair enough. That may have certainly been true during Shakespeare’s time. Yet if people in this day and age dislike lawyers, the context for people’s attitudes towards lawyers has, in my opinion, changed dramatically. That is, I don’t believe that the profession as a whole can be viewed as serving the interests of a privileged and corrupt establishment as the basis for the perceived animosity.

Indeed, the animosity towards lawyers these days seem to arise from the opposite: litigation that actually serves to meet social change and justice. I’m talking about class action lawsuits, medical malpractice lawsuits, personal injury cases and products liability cases for instance. In those cases, it is usually the consumer, i.e., the working class, that seek redress for wrongs committed against them by large corporations, insurance companies, and negligent doctors (i.e., the establishment). This is society’s sole means of redress against these imposing institutions.

Yet the people such litigation is there to protect nonetheless complain that these types of lawsuit raise insurance premiums, the cost of goods and services and an exodus of doctors from the medical profession, and they naturally blame the lawyers. That is, until a defectively designed or manufactured product results in the loss of limb; or a doctor makes a mis-diagnosis which results in the death of a family member; or a drug company manufactures and sell medicine that is supposed to ease the pain of arthritis and ends up causing your grandmother to die of a heart attack.

Yeah, let’s kill all the lawyers and see what happens then. No, it’s my proposal to only kill the bad lawyers. Like any profession, there are good ones and bad ones. Good doctors, bad doctors. Good cops, bad cops. Let us not assign the attributes of a few bad and desperate practitioners across the board to all lawyers. As a practical matter, I have found that while people generally dislike lawyers, when they need legal help, they usually like their lawyer. Lawyers can be and often are an engine for social change and justice; not just some boob looking for his next meal ticket. Maybe you should provide awards for lawyers who have truly made a profound positive impact on society. They are out there.

This isn’t just to Robert in Michigan: it’s a reply to all who wrote regarding the Shakespeare bit.

Most people simply blame lawyers, which only recognizes part of the real problem. The True Stella Awards is not a campaign against lawyers. Most lawyers are good and decent people who are trying to do the best they can for their clients and the ideals of justice.

On the other hand, some of their peers just don’t get it, and defend their even their most outrageous actions by claiming “everybody hates lawyers until they need one.” That’s not true at all: most people hate lawyers even then.

The problem is that we need lawyers. People can’t simply and reasonably explain their cases to judges and have them hand down a decision based on reason or logic — or even common sense. The American legal system has been so manipulated and convoluted by lawyers that we need lawyers to navigate our way through the complexities of the legal system — complexities they themselves created. 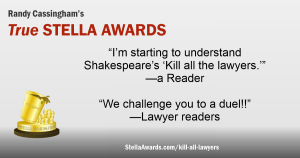 People need doctors, too, but we don’t hate them as a profession because doctors are not in the business of curing diseases that they themselves created.

Is that fair? You bet: lawsuits can accurately be called an industry in the United States. The lawsuit industry is estimated to bring in more than $50 billion per year in legal fees to lawyers out of over $250 billion in total cost to the litigants (2004 estimate).

That’s a huge drain on the country’s economy: it represents well over 2 percent of the USA’s Gross Domestic Product. By comparison, the United Kingdom’s ‘lawsuit load’ is less than 1 percent of its GDP.

And it’s a growing industry: as of 2001 (the most recent year that data is available), the 30-year trends are: U.S. population: up at a 1.1 percent annual rate. The consumer price index: up 5 percent annually; the GDP: up 7.6 percent annually. And tort costs? Up 9.1 percent annually — and it was up by 14.3 percent in 2001. This industry’s growth is not only staggering, it’s accelerating.

And that $50 billion figure is for lawsuit income only; it does not include anything else lawyers do, doesn’t include any collected percentage of punitive damages, and doesn’t even include their take from the “tobacco settlement,” for which the 86 law firms involved have billed the states a whopping $30 billion.

But don’t say they don’t have a heart: they’re graciously allowing the states to pay those fees over 25 years. And some of those firms say they’ve been ‘ripped off,’ that they deserve much more! Yet when you divide the billings of one firm by the total estimated hours they spent working on this case, it comes out to more than $22,000 per hour! Other firms are ‘only’ getting around $10,000 per hour. And you know they’re billing for plenty of hours.

So at least one segment of the U.S. economy is booming even while as a whole Americans are struggling. One thing to ponder: perhaps that’s a cause and effect situation.

And Then There’s This

Robb in New Hampshire: “Whenever I read these tales of ridiculously low levels of intelligence, I always wonder if you ever hear from the plaintiffs reading about, commenting on, or even admitting to how stupid their suit seems. Just curious.”

No, not that I’m aware of. But I figure that someday, someone will want to collect their “Award”.

My Flagship Email Publication This is True continues to come out with new stories every week. It’s “Thought-Provoking Entertainment” like Stella, but uses weird-but-true news items as its vehicle for social commentary. It is the oldest entertainment newsletter online — weekly since 1994. Click here for a This is True subscribe form.

5 Comments on “Editorial: “Kill All the Lawyers!””

You can no longer subscribe to Stella Awards: there are no more cases being written. However, you can subscribe to This is True — my flagship publication which continues to come out with new stories every week.

≡ List of All Cases
— Project Wrapup
Or use Search in the header.